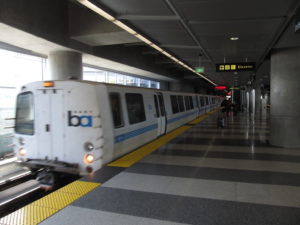 The current coverage area of BART was once home to electrified streetcar and the key system. The streetcar and key system had Trans bay traffic on the lower deck of bay bridge. In 1950s, the system was stopped and was succeeded by the highway travel. The study which was conducted in 1950 came up with the conclusion that the bay area traffic hitches would be solved by forming a transport region which would construct and operate a new and a high-speed transit network that would link the cities. Marvin Lewis was among the first supervisors who spearheaded this regional transit system.

The B.A.R.T planning started in 1957 with the setting up of B.A.R.T District, the body which would govern the system. Initially, the district had five members which were meant to have the B.A.R.T lines. The following counties were projected to be the initial members ;
Alameda
Contra
San Francisco
San Mateo
Marin
Santa Clara declined the offer to join citing the dissatisfaction of peninsula line which stopped at Palo Alto. However the B.A.R.T system will expand to Santa Clara in 2019. One of the members, San Mateo left the B.A.R.T saying that its people will pay taxes to carry people from Santa Clara which was not a member. The tax collection was weakened by the departure of San Mateo. A month later, after San Mateo departure, marlin withdrew. The withdrawing of the two counties brought down the B.A.R.T planning.

The construction works began in 1964. There were numerous engineering challenges which included excavating the subway tunnels, construction of aerial structures, tunneling, and lowering the centerpiece of the system.

Control and the associated problems

The ferrying of passengers began in 1972 between Fremont and MacArthur. The system later opened stages and the entire system opened in 1974. This is the year that the Trans bay tube started. The B.A.R.T system was praised as a major breakthrough towards the subway technology, although questions were asked regarding its safety and the huge amounts used for its construction. The train had several control failures during the first years of action. In 1962, several B.A.R.T engineers had identified the problems and suggested the use of automatic control systems. The board of directors dismissed this and the engineers lost their job by being fired.

BART (Bay Area Rapid Transit) didn’t come into existence in a few years, it’s an effort of a century. Read about the history of BART from the official site.